Under construction! Beware of falling pixels...

Pretty much my only hobby is...making junk. Sewing, gluing stuff to other stuff, whatever. But! I've been doing traditional art junk "full time" (whatever that means) since late 2015, but I've been making garbage pretty much my whole life. Here's my little gallery of GlitterGore nonsense! (Can y'all tell how much I like alliteration?)

Art from the past couple months! I was really burnt out after Christmas (I do themed ornaments, they're great but...no.) and OFC immediately threw myself into making Valentines themed art, like a fool. (Watermarks are my IG username - cuz I'm fuckin lazy. Deal!) I'm hoping to keep selling originals this year (now that I've finally become okay with letting go of..most things) but we'll see what happens I guess.

(I update my Instagram typically the day after I finish a piece, I'm kinda lazy updating here.)

I spent the majority of 2020 not doing jack shit and focusing on stickers & patches for my Etsy, but early spring of 2021 I decided I was going to force myself to enjoy making art again, even if nothing very good came out of it. I've been having fun, and starting too many projects. - digging into the things I've always loved painting in the first place: scantily clad ladies & bones. I started working on canvas again too instead of just being worried I was wasting panels if something didn't come out "good enough". The self-portrait was the first drawing I'd posted on social media in pretty much a full calendar year. Then the third - a gift for my childhood best friend in March was the first time I'd touched paint "for real" since late 2019. I have the majority of these available as prints in my Etsy.

old artwork
Some favorites from 2016-2019 - from most recent to least. I actually *barely* made anything in 2020 because of both the state of the world & my personal life, but whatever.

2019
This is essentially all I posted in 2019, I made a few things from March thru May, entered a local gallery competition & won a spot...then I just kind of fell into the void and stopped making anything until Nov/Dec 2019. Sheesh. I started the year off with a horrific breakup & cranked out a few things to process everything, then had another in late fall and you know. Crawled under a fucking rock. Lots & lots of Lil Peep portraits - I'd been trying to work on semi realistic stuff for a while and could never decide what to paint so he was an easy choice. (Especially because it kind of...pissed off a lot of my followers. I thrive out of spite.) 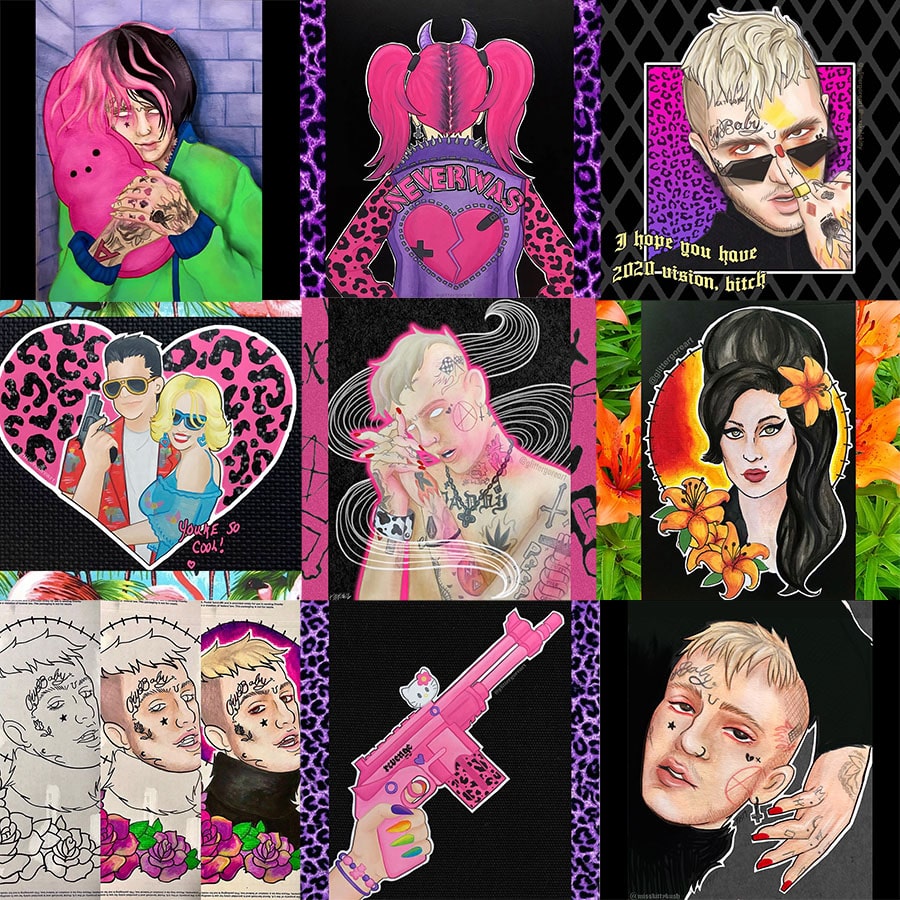 2018
These lead up to some totally super fun burnout, (Top row center is actually from a YouTube video where the voiceover was me bitching about how burntout I was) but I also did a lot of my favorite pieces. This was also the first time in a while that I could see myself improving - but I was also still forcing myself to crank out 2 or more pieces a week so there's a decent chunk of stuff I don't like at all. Maybe late summer I started doing more portraits, and I worked almost exclusively on mixed media & watercolor paper. (I'd learned from 2017 - I'll get to that in a minute) 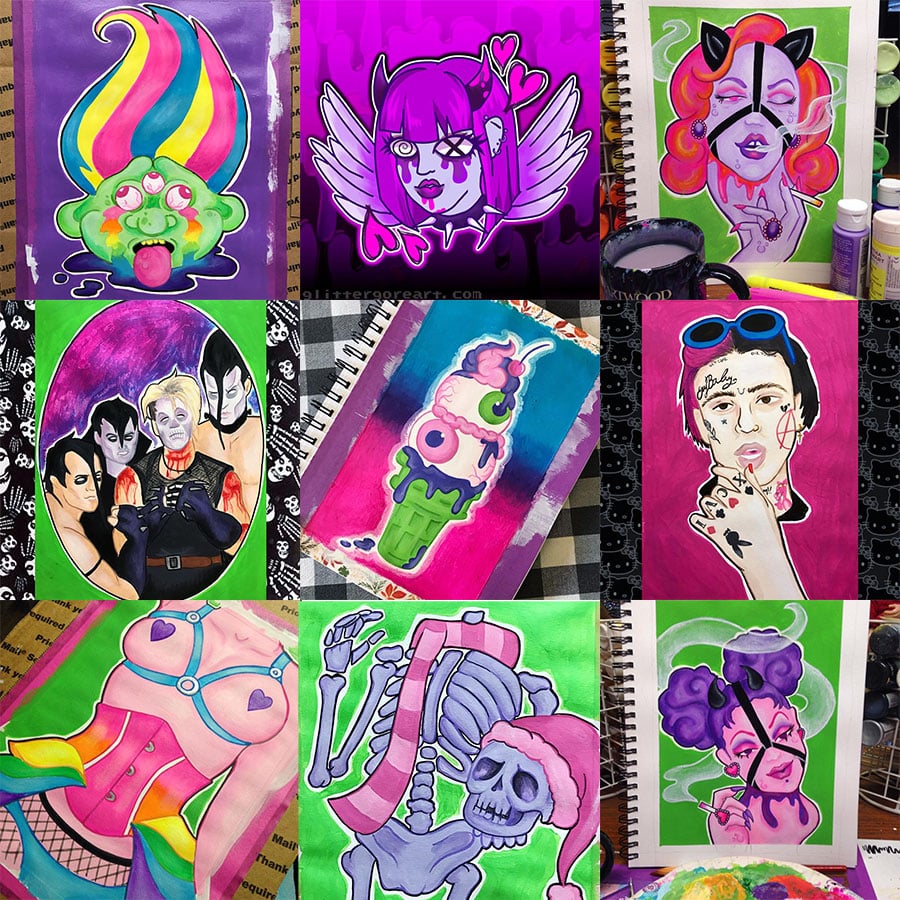 2017
Split into two parts - first my 9 favorites, then some other stuff I did. Beginning of the year I was trying to clean up my lettering. I did a lot of commission work in 2017 & was working really big - most of my paintings have always been 9x12" or smaller but I did some 2ft canvasas for the first time. Shit takes up WAY too much room in my house, still. I tabled a few events, worked with a LOT of oil pastels, and was forcing myself to paint Monday through Frrday. I was in a super abusive relationship at the time and a lot of these punched me in the gut to work on because of what I was processing while I did them. Plenty of mindless stuff too, totally scraping the bottom of the barrel for content because I was actively trying to post on Instagram & Facebook multiple times a week and doing whatever people seemed to want. Probably sold more garbage than ever but that's cuz I didn't want to hang on to most of it - again, because I felt like shit lol. Despite making more art than ever this is the beginning of me really fucking hating everything I was doing. 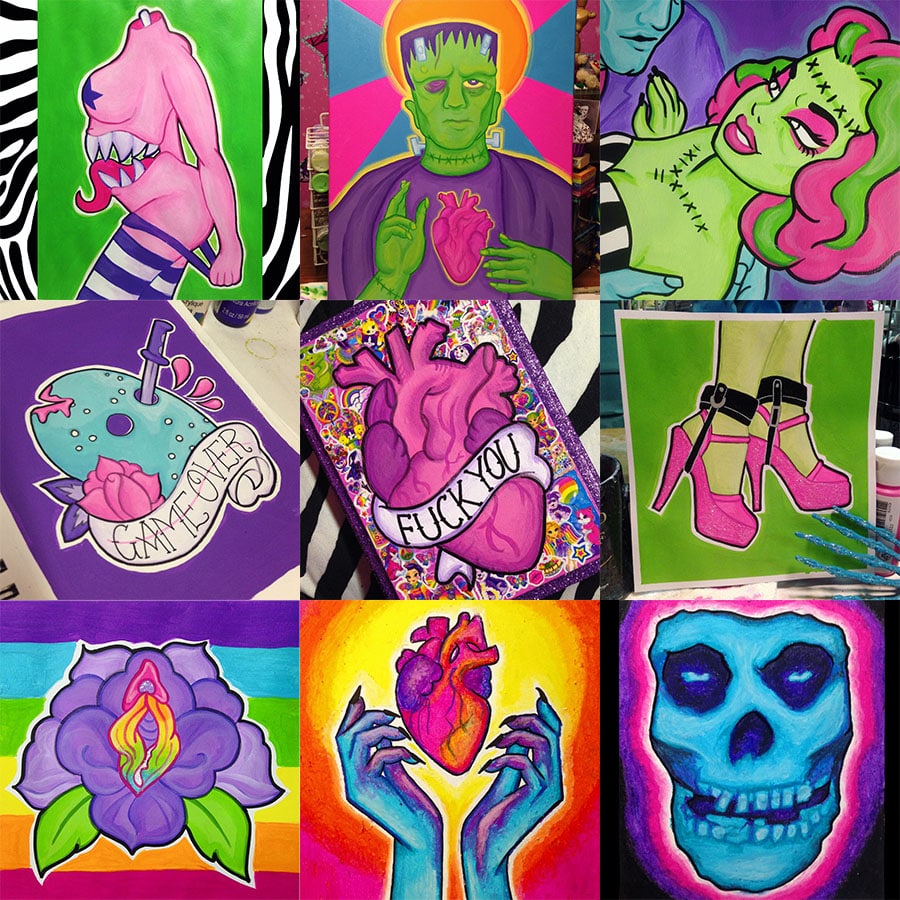 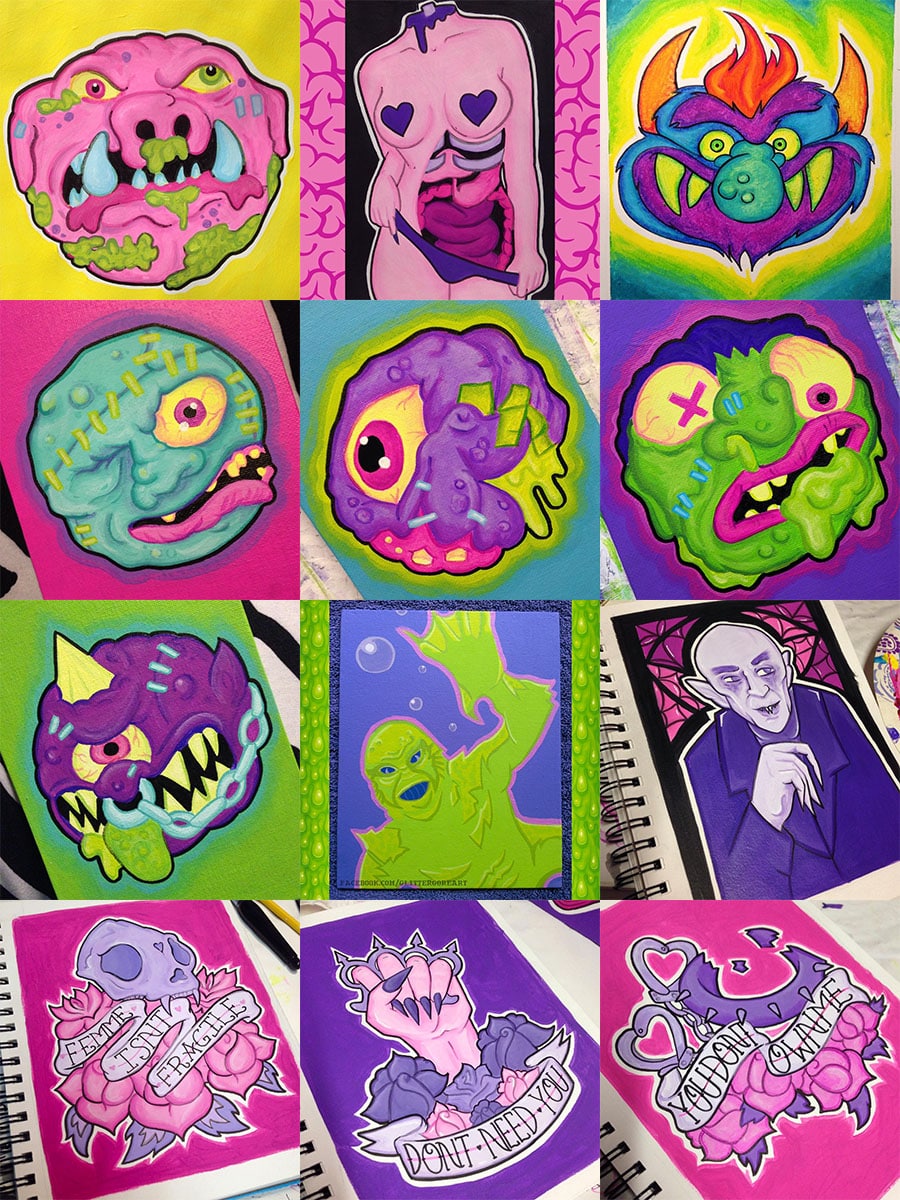 2016
The classics! Fall of 2015 I started painting when I got home from tour, for like - the first time since highschool. I only had a handful of craft acrylic colors on hand (Purple, pink, green, blue) and that ended up shaping my preferred palette & what GlitterGore would become. Early early 2016 I picked out a name, set up a website, and started posting. I tabled during GOTJ & sold art for the first time, then launched a merch store that fall. A lot of weird turbulent life processing with art then too - but the four in the corners are still some of my all-time favorites & I still use them for merch. 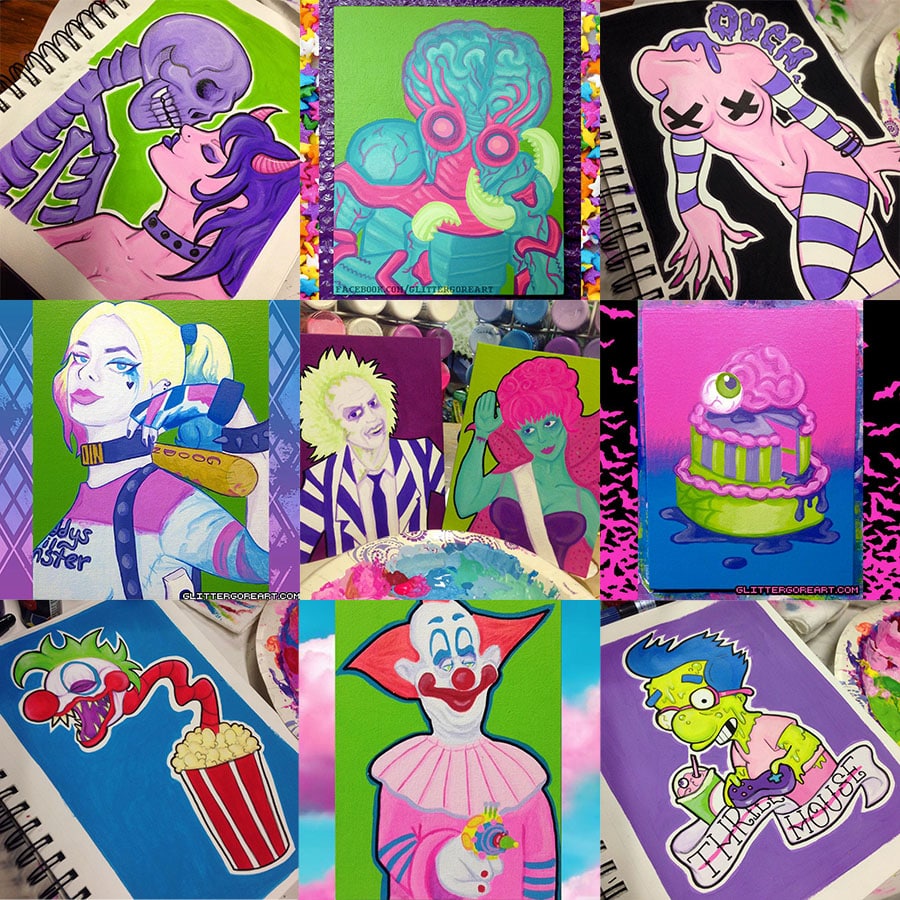